Beauty & the Beast – A Blight on Our Society, or A Magical Break? 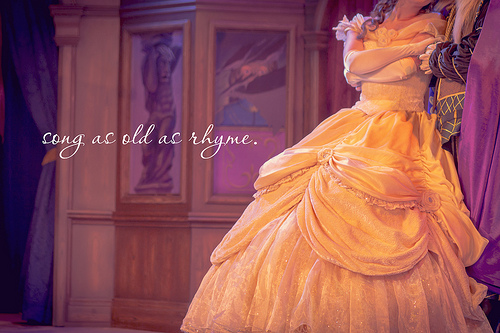 Unless you've been living under a rock lately, you've probably heard about the little movie that's out now called Beauty & the Beast.

I was lucky enough to catch this one on opening weekend and it has been interesting to hear people's reactions as they've made their way to the theater.

Yes, there's been controversy about what the media portrayed as a big "gay scene." I won't get started on that hoopla since there really wasn't anything to be shocked about. Perhaps that could be another post, or, perhaps the media should look up the meaning of a "scene."

Some other complaints I've heard about the movie is that: Emma Watson's voice wasn't strong enough to carry the movie; why are we celebrating bestiality?; the movie portrays the lesson that looks and personality don't matter when you have money and prestige; it's demeaning to women; Disney is just trying to make a buck (which, aren't they all?); and the list goes on.

Now, we all know that many people loved this film (and with good reason), and we all know there are people out there that just love to always raise a stink no matter what the issue is. But, I felt it important to play devil's advocate and address some of these issues.

Yes, Emma Watson's voice was not of Broadway superstar caliber, but it was nice. It was sweet and on the "normal" side, just like her character was supposed to be. Belle is portrayed as a fresh-faced, no makeup, no fuss kind of girl, which is very different from the rest of the women around her at that time. It worked. And I don't feel it detracted from the overall soundtrack because everyone else did have an incredibly strong musical presence. Alan Menken is famous for his catchy, sweeping scores and the cast did this justice.

In terms of bestiality... it's a fairy tale. We all know he's really a man who has been cursed. It's not an actual animal and there are no make-out scenes or anything like that. Ever hear "the suspension of disbelief"? It's a key component of theater and entertainment. This is obviously not a movie based in reality. We've watched much worse as kids. Chill.

As for money and power being the determining factor in picking a mate, I think perhaps people are missing the point. She could care less she was in a castle. She was only there to save her father, and she tried to get away - more than once. It wasn't until she began to see the Beast for who he really was - after they began to have real conversations and learned about each other's lives and interests - did she begin to respect him and care for him. It was the mind inside that drew her interest - not anything else (although, let's face it, the library didn't hurt).

And demeaning to women? Anyone who follows me knows I am a proud supporter of women's rights. We are all "mighty girls" and it's time to show it. So for me to say that I didn't feel this was demeaning, means something. The time period this was supposed to be was a very repressed society for women. So of course those viewpoints from the villagers would be included. But didn't you notice how she took control of the situation at hand?

And let's not forget that the movie showed she was an inventor, always one step ahead of her father, an advocate for expanding the knowledge of women, an avid reader (rare for a woman then) with an incredibly sharp mind, a woman who scoffed at the advances of the strongest and most handsome man in the village because he could not keep up with her intelligence. These things seem to celebrate the power of women, not demean them. It seems she has proven that she is "more than just a princess." I'm failing to see the issue here....

This movie was visually stunning and magical in every sense of the word. It offers audiences the chance to escape from the crazy, disheartening world we are currently living in. It gives us a break from our everyday stress, allows some of us to relive moments from our childhood, floods our senses with the power of the arts (Something that everyone needs. The arts are life itself, it has been said, and proven true many times over). It offers us two hours of magic, which this world so desperately needs right now. There's a good reason why Disney is making that big buck right now.

Sit back, relax, and enjoy! Let yourself be entertained for a couple of hours. The cynicism of the world will still be waiting for you when you get out. Just let yourself enjoy the power of a story until then - just like when you were a kid. It's amazing what a little magic can do!
Photo Credit: chris.alcoran Song as old as rhyme. via photopin (license)