Drive-In Movie Theaters: A Brief History and Why They’re Thriving During a Pandemic 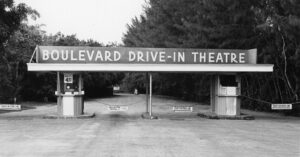 During a time when the spirit of Americana seems as far away as ever, what once was a thing of the past is now a safe night of fun. That’s right, we’re talking drive-in movies. With indoor movie theaters still shut down, if you’re lucky enough to live within driving distance to one of these emblems of America’s classic past, now has never been a better time to pick up drive-in moviegoing as a new date-night or family-time routine. But before you bolt for the silver screen, here’s a bit about how drive-ins began and why they’re seeing a bump in popularity during a global pandemic.

The first drive-in movie theater was invented in 1933 by Richard Hollingshead of New Jersey. His idea for a drive-in theater was originally to accommodate those who were too big to comfortably fit into indoor theater seats, specifically his plus-sized mother. The concept began when he draped bed sheets over a wire between two trees in his backyard and set a projector on the hood of his mother’s car. After expanding, he opened his drive-in to the public at 25 cents a car, advertising the experience as family-friendly entertainment, regardless of how loud your kids are.

Hollingshead’s success inspired the emergence of drive-in theaters in every state across the US and some internationally. However, drive-ins saw the most success between 1950-1960 with the number of drive-ins in the U.S. peaking at 4,063 in 1958.

Drive-ins began to fall out of the style in the late 1970’s with the introduction of VHS and the increasing popularity of in-home televisions, which left many families unwilling to pay for movies when they could just watch them in their homes. This, along with indoor theaters’ ability to show a film 6-8 times a day, left drive-ins gasping for revenue and showing B-level and even some X-rated films to stay afloat until most went out of business.

While drive-in theaters have lost their appeal in the eyes of big organizations, there are 324 remaining drive-in movie theaters in the U.S. that are almost all family or small-business owned. New York is the state with the most remaining drive-ins (15) with Pennsylvania and Ohio trailing close behind.

And with indoor theaters remaining closed, drive-ins are seeing an unexpected boost in popularity during the COVID-19 pandemic. A safe alternative to sitting in a packed theater and an exciting new form of entertainment for much of the younger generation, drive-in theaters are proving to be a valuable new plan for weekend family time and date nights.

If you’re looking to head to the drive-in any time soon, make sure you check the theater’s website for updated rules and policies regarding COVID-19. You’ll likely be encouraged to order your tickets ahead of time online and park farther apart than usual, so the lot will most likely only allow partial capacity. Dining, snack-shack, and bathroom policies vary by theater with some drive-ins encouraging you to purchase meal passes to bring food from home and others allowing patrons in at partial capacity. But whatever theater you go to, make sure you don’t forget blankets and pillows-- A drive-in experience isn’t complete without comfort!

Tess Howat is from South Glastonbury, Connecticut and is a Skidmore College graduate with a Bachelors degree as an English major with a focus in music journalism and a business minor. A poet and folk singer/songwriter all her life, Tess has fostered a uniquely creative writing skillset and a strong love of language. She hopes to pursue a writing or advertising career in the entertainment industry.

View all posts by: Tess Howat