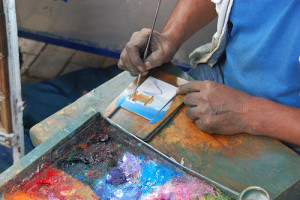 At Barnes and Noble a few weeks ago, after I’d read two chapters of Sandman, the adult graphic novel written by Neil Gaiman, I happened to walk by a box that read, “Everybody Can Draw.” The message slapping my face: all I needed to draw fantastically in the way I saw in that graphic novel lay before me in this single kit, which included a DVD lesson, sketchbook, and illustration materials. I bought it on the spot, because I myself have written children’s stories I’d love to be able to illustrate on my own. And who doesn’t dream of being a great artist, someone who can make their hand dance and put the world on paper? I thought this kit would make learning to draw a nonissue, fairy dust to make me Rembrandt. After all, I loved art in high school.

Weeks later, I whipped out the kit. I popped in the DVD. This makeup-ridden, blonde, Australian woman appeared on screen and proclaimed, like the title of her DVD, that EVERYONE CAN DRAW. She went about the steps, first naming the different materials I should use, then going into pencil experiments, to basic shapes, to shading, to finding shapes in everyday objects, to measurements, to still life, to people, to animals, and then she told me how I can branch out into color and non-realisms. The process for her was so simple that she made it sound like a hamster could draw. However, my first reaction to the DVD was that she gave it the wrong name. The DVD should’ve been titled, “She Can Draw.”

I didn’t stand a chance in her wake. She’d been practicing the techniques before she grew a decade old. For her, drawing was natural and relaxing. For me, drawing was foreign and arduous. My hand can’t flick and dance the way hers does because of a difference in the time we’d devoted to the skill. In the end, I realized the kit never claimed to be fairy dust. The kit claimed everyone can draw, and that is the truth, to an extent, but it’s missing an end line. It should say, “Everyone Can Draw, But If You Want To Draw Well, It Will Take A Great Deal Of Practice.”

The video did give me a nice guide for this practice. I’ve told myself that every day I’m going to draw one object. I’ve started with basic shapes, like cones and spheres, and hope to work my way up to teddy bears, and then to the scene at the park where I normally write. I’ve been practicing my writing for years in a similar way. Every morning I wake up and write my dream, every day I write ten jokes, and every night I write a journal; throughout the day I commit as much time as humanly possible to my fiction, but those other three obligations are a constant.

The idea of practice dates back thousands of years ago to the philosophies of Aristotle, who lectured about habit and learning through repetition, so it’s not just a bluff your music teacher once taught you. To learn any skill, you will need to know what you’re practicing (so maybe pick up a DVD of that skill’s basic staples, before you start trying to play the guitar with drumsticks, or trying to write a story without a plot). Because everyone can do anything, but to do that anything well, it will take a great deal of practice.

Adam earned a BA in Philosophy from Skidmore College. Currently, he is a writer of children's stories, adult fiction, and poetry. You can see some of his other work on his blog at www.peacelovebergie.wordpress.com, or you can read his short stories in literary magazines such as Blunderbuss Magazine.

View all posts by: Adam Berg