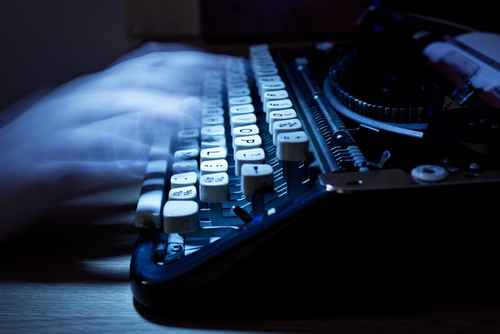 “Throughout Hemingway’s career as a writer, he maintained that it was bad luck to talk about writing — that it takes off ‘whatever butterflies have on their wings and the arrangement of hawk’s feathers if you show it or talk about it.’ Despite this belief, by the end of his life he had done just what he intended not to do. In his novels and stories, in letters to editors, friends, fellow artists, and critics, in interviews and in commissioned articles on the subject, Hemingway wrote often about writing. And he wrote as well and as incisively about the subject as any writer who ever lived…”

A recent trip to Paris and to some of Hemingway’s old haunts — Shakespeare & Company, Deux Magots, Brasserie Lipp — inspired me to read one of the author’s most memorable works: A Moveable Feast. I found that the commentary that Hemingway provides on his writing and his writing process in this novel heavily influenced the way I thought about my own writing.

1. Remind Yourself Why What You Are Writing Is Important to You.

A Moveable Feast is comprised of a series of short, autobiographical stories that paint a vivid picture of Paris and give a great deal of insight into the author’s private life. In the story “A Good Café on the Place de Saint-Michel,” Hemingway describes going to a café to work on a story. His writing session goes so well that he refers to the story as “writing itself.”

As a writer, I can definitely relate to this; during my three-week writing seminar in Paris, there were days when I felt like it would take me hours to write one sentence. On other days, I could invent metaphors and dialogue with no trouble whatsoever. If there is any advice to be taken away from this, perhaps it is that we as writers should delve as deeply into our writing as possible. When we figure out why we care about what it is we are writing, perhaps we will find that our words and ideas flow freely and come without us needing to force them.

2. Write Every Day, But Allow Yourself to Renew & Regenerate.

One of my favorite tips from Hemingway comes from “Une Generation Perdue.” The story reads, “I had learned never to empty the well of my writing, but always to stop when there was still something there in the deep part of the well, and let it refill at night from the springs that fed it.”

I love this idea because it reminds me of something my professor reiterated to me and the other students in my workshop time and time again: WRITE EVERY DAY. Even if you think it’s horrible, even if it’s nothing more than a description of what you ate for breakfast, WRITE; it is helping us hone our craft even though we may not realize it. I also love the idea of writing being a well, because it implies that the world contains a never-ending supply of inspiration to feed our writing!

In the story “Hunger Was Good Discipline,” Hemingway writes, “all the paintings were sharpened and clearer and more beautiful if you were belly-empty, hollow-hungry…all your perceptions were heightened. The photographs looked different and you saw books that you had never seen before.”

Now, I’m not advocating that we starve ourselves for the sake of being good writers. But Hemingway was definitely onto something about the importance of looking at the world more closely, as he seemed to find it easier to do when he skipped breakfast. Just sitting in a café allows one to observe an endless amount of external stimuli. Here is an excerpt from one of my stories that grew from sitting in a café for a couple hours and jotting down sentence fragments in my notebook:

“Carine’s preference for the cramped, rustic café was another source of confusion for those who knew her well. But she felt more at home amid Loustic’s old-fashioned décor than she ever would in some sleek, modern, coffeehouse serving several different kinds of espresso bean. With its squat wooden tables, booths covered by blue and white geometric-patterned fabric, and exposed brick that merged to meet patterned wallpaper, Carine had always thought that the café felt a bit incomplete—but not in a bad way. It was as though it belonged to an artist, who had high hopes for the space when he moved in, but never managed to finish decorating.

“Today, Loustic’s staff was playing exclusively Beatles albums, probably in an attempt to cater to the multitude of English-speaking students that frequent it. Normally, Carine was too absorbed in homework to even notice what music the café was playing, but today she listened to everything. She heard the tinkle of a customer searching through her change purse, and the decisive jangle of it being thrust onto the wooden counter. She heard the scrape of glass plates as they were stacked on top of one another, the slam of a refrigerator door, and the grating of a table being pushed and pulled into place.”

I want to bring up another point about keeping journals: I have found that keeping a journal is much more beneficial if I jot down notes (lists, words, even doodles) rather than full, coherent sentences. Writing notes means we can return to our notebooks, think even more deeply about our initial observations, and elaborate on the base, sensory observations we have scrawled down.

5. Don’t Be Afraid To Go To the Depths. Dig Deep Enough To Hit Your Own Nerve.

Hemingway brings up another fascinating idea in “Hunger Was Good Discipline.” He writes, “I started to think in Lipp’s about when I had first been able to write a story after losing everything…. What did I know best that I had not written about and lost? What did I know about truly and care for the most?”

This is something that I am sure a lot of writers struggle with. Sometimes writing can take us to a very emotional place — especially if we can relate to the subject matter on a personal level. As a writer, I have found that my best writing occurs when I don’t shy away from past experiences or existential questions. Though it may be difficult, writing about topics that are painful and scary will get easier over time. As Hemingway says, “It only takes time and it only takes confidence.”

Ally Donovan was an English major and Film & Media Studies minor at Skidmore College. She is passionate about writing, and she feels lucky to have been able to explore this passion in Italy, England, and most recently, France. In her spare time she enjoys playing the guitar, listening to Bob Dylan, and cuddling with her dog.

View all posts by: Ally Donovan