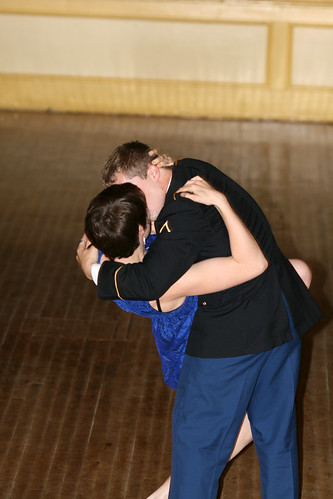 I always say there is magic in dance, in so many different ways. I've seen many wonderful things happen through dance. (That is something for another discussion, for sure!) But the other night, I was privileged to witness the sweet and romantic side of dance that provided a perfect memory for one special couple.

Setting: The Diamond Dance at the historic Saratoga Music Hall, hosted by the Saratoga SAVOY Center of Dance. The stars are out. The band is swinging. The floor is crowded with dancers of all ages enjoying a night out on the town. It could have been a scene from 1942, but it was indeed 2013. And one lucky lady got a very special surprise during the band's break.

The DJ announced a snowball dance (one couple starts and then grabs more dancers at various points in the music), and in honor of Memorial Day asked a serviceman in the crowd to lead it off with his special gal. "Marry Me" starts playing over the speakers as the couple begins to dance. The rest of the crowd circle around them on the dance floor and no one else joins in. About halfway through the song, he drops to one knee and holds out the ring. The crowd cheers, she of course accepts, and they finish the dance.

The first thing every woman has said to me when I've told them this story is, "Ohhh, how romantic!" And indeed it was. It was the perfect combination of old-fashioned charm with a modern twist. A sweet moment that turned into a lifetime memory for Private Richard Frank and Sarah Guldner.

This wasn't the first proposal the Diamond Dance has seen. In fact, it was the third. SAVOY owner, Dave Wolf, said that in addition to the 3 proposals, he also heard on a couple of occasions that the Diamond Dance is where people had a first date with their future spouse. What is it about the Diamond Dance that seems to bring all these couples together? We'll probably never know, but certainly the combination of fantastic music; historic location; fun, laid-back atmosphere; and of course the magic of dance must have something to do with it. And apparently, the Diamond Dance was very appropriately named!

The Diamond Dance is open to the public and held every third Friday at the Saratoga Music Hall in Saratoga Springs, NY. Click here for more information, or to see other pictures from the engagement and the dance.