Reading in a Technological Era 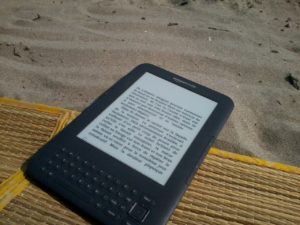 Once upon a time, books were the primary form of entertainment for people. But with the technological renaissance came other, easier ways to pass the time. Slowly but surely, books have become scarcer and scarcer.

There are a few culprits behind the increasing disappearance of the physical book, the most guilty of which is the Internet. Publishing companies used to have a monopoly on book distribution, and focused on churning out the greatest quantity of books they could without much emphasis on marketing. But now, the Internet allows authors to publish their own work online using services like Lulu or Kindle Direct, and they can market their work through social media, which is putting publishing companies out of business. Amazon specifically poses a great threat to publishers and bookstores by allowing people to simply search for the book they want and read it instantly.

Now, I know what you’re thinking. Why does it matter if books are transitioning from physical to virtual? It’s not as though they are going extinct. The sad truth is, people just aren’t reading as much as they used to. Movies, TV shows, and video games are easier mediums for people to consume, and nearly everyone has a device that can play them. Another problem is that kids associate reading with schoolwork, and often find it tedious as a result. But not reading enough long-form text can actually negatively impact children’s cognitive and critical thinking skills later in life.

Fortunately, there is still hope. Many are concerned with preserving the future of the book and ensuring its survival. And, while books are overall less popular than they used to be, they can still achieve great success. For example, Harry Potter went on to become one of the best-selling franchises of all time, but the original book series actually grossed more money than the films.

So, don’t weep for books just yet, but next time your son or daughter asks to watch TV or play Fortnite, consider putting a book in their hand instead.

Eddie is an English major and prospective German minor at Skidmore College. He is a staff writer for the Skidmore News and the content coordinator of the Skidmo’ Daily, the college’s satirical newspaper. Eddie has been an Eagle Scout since 2016, and greatly enjoys outdoor activities like hiking and climbing. However, his true passion is writing, and he is looking forward to one day becoming a published novelist.