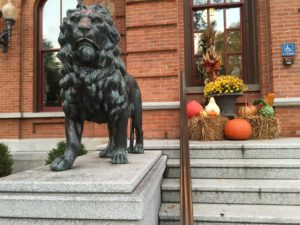 Incensed. That is the word I would use to describe what I felt when I found out that the City of Saratoga wants to replace the historical Music Hall with offices...

Those of us involved with the arts world know just how important the arts are. There is now a lot of scientific proof about how they affect so many things in our world and our bodies in a positive way. Nothing else really compares! And yet, we are seeing arts programs quickly disappearing from schools. Movie houses are closing down left and right. School music programs slashed from the curriculum. Dance studios forced to close their doors. The list, unfortunately, goes on & on.

Living in such a historical town as Saratoga (hey, it even says on the signs, "Health, History, Horses"), a place known for its involvement in the arts as well as horses, a place that has significant historical significance, I naively never thought I'd see the day when they would erase such a significant part of its history.

Originally, the Town Hall Theatre (also known as Broadway Theatre) opened its doors when the City Hall building was first erected in 1871. The original theater consisted of "an attractive stage, a balcony extending across the rear and sides, and boxes for the orchestra section and balcony," according to an article by former City Historian Evelyn Barrett Britten in 1952. Including footlights, green rooms, and of course scenery, the theater not only was home to local theater companies, but also saw singers, musicians, vaudeville acts, magicians, minstrel shows, and motion pictures. Famous actors, directors, and musicians have played within those walls, including Louis McHenry Howe, advisor to President Franklin D. Roosevelt; Irish tenor Chauncey Alcott; and actors like Sarah Bernhardt and David Belasco.

This article describes what the city is proposing for the space, but incorrectly states that the current Music Hall is not a part of the theater's history because it's not the original theater. He's partly correct in the sense that it is not the whole theater. The original theater took up both the second and third floors of the building. The current third floor was the original balcony part of the theater and connected to the building's bell tower, both of which were removed in 1934 for safety reasons after the building was not properly maintained. The current Music Hall is the remaining part of the theater. Dave Wolf, owner of the Saratoga Savoy Center of Dance and the organizer of the hugely popular Diamond Dance held in the Music Hall every month, had a very good analogy. "Just because the second floor of the hall has already been destroyed and the hall was given a different name, does not mean it isn't the same old hall! If I demolish half of your house, is it suddenly a new, different house?"

He makes a good point. Just because the theater is smaller than it used to be originally, doesn't mean that it isn't still the same theater and no longer has historical significance!

The article also states that the hall "is currently underused." It may not be used to its full potential, but the space is still very much used. The monthly Diamond Dance is a large event that hosts a live swing band and a huge & fantastic wood floor for dancing. Originally running on a Saturday night, Wolf was told back in 2013 that they refused to rent the hall on weekends. He moved the event to a Friday and children and adults of all ages still attend the event with attendance numbers that are regularly well over 100 people. It is absolutely magical to be there in that historical space, listening to that classic music, and watching multiple generations laugh and dance together. To me, that melding of the arts, cultures, history, and generations is really what Saratoga is all about - transcending the centuries, uniting us all in a shared experience.

The Hall is also regularly used for productions of the Saratoga Children's Theatre, a group that has become an invaluable resource for our local youth interested in all aspects of theater. In a time of witnessing the arts being stricken away from our youth, this organization is providing the entire Capital District an amazing opportunity, often bringing in NYC actors for workshops, incorporating top area choreographers, and providing educational trips for their students.

In this rapidly growing city, I find it hard to believe there isn't another solution for these extra offices they need. Especially after reading this article released just this past April, when they were proposing an actual theater district. Public Works Commissioner Skip Scirocco stated, "The time is now to give back the city a beautiful part of its history; something for future generations. The creation of a vibrant theater district will spur economic activity downtown, create jobs, raise tax revenue, and be a substantial boost to our arts community and the quality of life for our residents. We want this to be new, innovative, and modern, but we want to keep the historic connection too. The city is so well-suited to this idea, being a community of the arts."

Well, I'd have to agree, but given this latest turn of events, I'm left wondering what the hell happened? How did we go from a proposed theater district to tearing down our only historical theater just to make space for a few extra offices?!?

If you want to help preserve this important piece of Saratoga history, then today is the day. This isn't finalized yet and Mayor Yepsen will be in meetings with the commissioners before anything is signed, so please let her know how you feel about this ASAP and tell her that we want the arts - and history - to stay in Saratoga!

Feel free to comment below with what the Music Hall means to you, and of course share, share, share this article to help spread the word. Let's make sure that we don't lose such an important resource for this town!

Info on the excitement of the re-opening of the Music Hall in 1993 here.UPDATE 6/17/16: The City Council unfortunately approved this option and has sent it to OCA. It is now up to the State whether if they will approve this course of action, or tell the City to come up with a new plan

Info on the excitement of the re-opening of the Music Hall in 1993 here.

UPDATE 6/17/16: The City Council unfortunately approved this option and has sent it to NYS Office of Court Administration (OCA). However, it is not yet finalized, so there is still a lot we can do. The decision is now up to the State whether if they will approve this course of action, or tell the City to come up with a new plan. So while continuing letters to the City Council is still good, it is best to focus our efforts on a higher level at this point. Below are a bunch of links for other people you can contact about this.

Also, be sure to sign the petition and join the Save the Saratoga Music Hall Facebook Group to stay up to date on all the latest news and ideas. The information there is being updated regularly, so that will be your fastest news source.

There is a committee of people currently working behind the scenes with several different plans in the works. Stay tuned!

WRITE TO OCA:
(They will NOT look at emails, but they will read faxes!)

A BRIEF OVERVIEW OF THE OTHER OPTIONS THE CITY DISCARDED  (Note that removing the irreplaceable Music Hall was the 2nd most EXPENSIVE option, not the cheapest as they have been making it seem...)

OVERVIEW OF THE MINUTES FROM THE CITY COUNCIL MEETING

Photos are not to be used without prior permission & license.